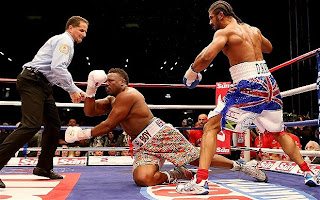 A highly anticipated grudge match that had an unexpected outcome. Dereck Chisora showed great heart and a strong chin by continuing to fight back after being hit with some great shots by Haye, but in the end Haye was victorious with a fifth round TKO .Despite the fact that there weren't any titles at stake it was a fight of pride and Chisora being the loser now has to pay $31,000 to charity.

Haye being the former cruiser weight and heavyweight champion had speed and a harder punch which he showed throughout the fight.Chisora came to the fight with an extra 37 pounds and tried to land heavy blows throughout the fight but they were ineffective.Chisora survived an eight round count but was knocked down by another left hook by Haye and the referee Luis Pabon decided that he could not continue.

It was surprising when both fighters hugged and exchanged words with each others team there was no way better to end the night. The hate between both fighters helped attract a large crowd in London, it was said to be larger than the amount of people to attend the heavyweight title fight between Frank Bruno and Lennox Lewis in 1993